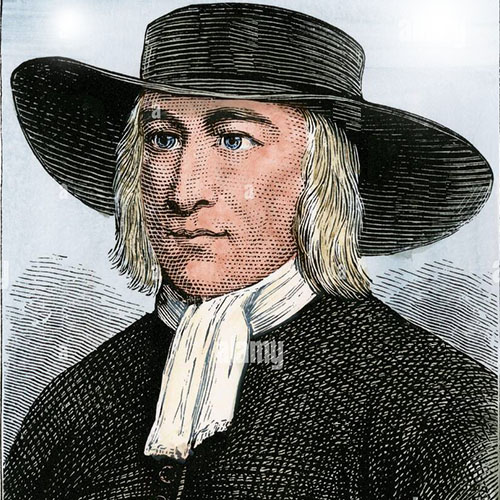 “Be patterns, be examples in all countries, places, islands, nations wherever you come; that your carriage and life may preach among all sorts of people, and to them; then you will come to walk cheerfully over the world, answering that of God in everyone; whereby in them you may be a blessing, and make the witness of God in them to bless you.”

…that of God in everyone…

Quakerism begins in England around 1650. A very young man, in his twenties, named George Fox was disillusioned and frustrated during the English Civil War when Christians were killing one another in the name of their politics and their various religious sects.

It was then that young George had a revelation, a mystical Experience that changed his life. He wrote of that: “And when all my hopes in them and in all men were gone, so that I had nothing outwardly to help me, nor could tell what to do, then, oh, then, I heard a voice which said, ‘There is one, even Christ Jesus, that can speak to thy condition’; and when I heard it myvheart did leap for joy.“

Thus began more than a half-century of his ministry and so began The Religious Society of Friends which also came to be known as Quakerism.

What Fox was describing was to become and remain the central principle of Quakerism, that is, the direct experience of the Divine Light, Guide and Source is all that is required for oneness with our Creator.

And Quakers believe that there is “that of God” in every person. This is sometimes spoken of as the “Inner Light,” a guiding spirit that emanates from the Divine in each person and provides direct access to the Divine with no intermediaries.

The importance of the reality of direct communion with that Spirit— no matter what you call it—is central to Quakerism.

George Fox has a confidence beyond his years and no fear of speaking truth to power. Once when facing a court for some “blasphemy” or  another he told the judge that he should quake at the name of the lord. The judge then began to mockingly call Fox and other Friends “Quakers”. It stuck. Rather than resist it, Friends embraced it.

The name Society of Friends arises in from the Gospel of John, 15:15— “ I have called you friends, for all the things that I have heard of my Father I have made known to you.”

By the end of George Fox’s life and with the ministries of many other like-minded companions, both men and women, more than 10% of Britain had become Quakers and Quakerism had spread to Europe and to the New World.